News:
Does Manhattan Project live up to the Duke challenge of past games? Does it offer a renewed value for scroller games? Do you really think it is worth buying and playing? Read on and you shall see my first game review: Duke Nukem: Manhattan Project.

Full Story:
Side scroller games have been around for a long time. From Arcade to Consoles, but for PCs it started off good then just went nonexistent. Games like Contra and Double Dragon and the original Duke Nukem were the starting points. Now it is the 21st Century and FPS pretty much rule the majority of gamers. Because I am from that side scroller generation of gamers, I was excited to here about Duke Nukem: Manhattan Project.

Installation and setup of the game was simple and easy. My mid-range game machine was used to get an average of the types of machines that would run it. A 1 GHz. Pentium 3 with 512 meg of RAM, 128 meg Gforce 3 ti 200, and Sound Blaster Live Platinum. 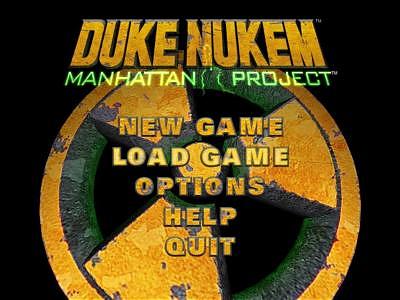 Coming out of retirement Duke is asked to come to New York and battle a villain called Mech Morphix and the ever so familiar G.L.O.P.P. Duke battles his way across towering skyscraper rooftops and through gritty subway stations. He battles many familiar enemies and some new added enemies. Of course you wouldn't have a Duke game without his famous one-liners.

Overall game play was simple. You move either right or left, you can jump or crouch, and if there is a latter in your reach, then you can climb them and also ropes to climb across in certain areas. You must also collect key cards in order to advance in stages. The graphics were real crisp and clear. All street signs and such were easy eye candy to watch as you move thru the first stage. There are in between areas, which have to load up but were quick which keeps game play more enjoyable. You can either play with a game pad or keyboard. I personally tried both and found the game pad easier to use. There is a basic music score in the background, but I can say that it didn't do much for me until I got to the end stages.

At the end of stages you take on Morphix in some sort of battle ranging from Duke taking him on in a Helicopter to fight him face to face. There are also some enhancements that also keep you busy when monsters are not shooting at you. There are Nuke symbols thru out each stage that you can collect for points and if you collect enough can enhance your weapons. Also at the end of each stage is a women tied up. You can rescue her for his famous one-liners and for more points. I also found myself experiencing something similar to games like Half Life where you have to do something that do not pertain to killing monsters like elevators and jumping on balconies. Using subway trains to get to other areas by walking on them. Of course unlike Half Life, it fits this type of game more and I didn't mind.

There are 8 missions in all and 3 stages in each mission. 9 powerful weapons to your disposal: Golden Eagle Pistol, Shotgun, Assault Rifle, Pipe Bomb, G.L.O.P.P. Ray, Pulse Cannon, Pneumatic Rocket-Propelled Grenade Launcher and the Mighty Boot kick. I have tried all of these and found them most enlightening. I will say that the pipe bombs do come in handy in a lot of stages. He also has his cool jet pack and can achieve double damage if you collect the right symbol.

So to answer my questions in the beginning of this review I will say this. As far as it being a true Duke game, yes I think they did a good job. Granted those of you who haven't really played a lot of scroller games my think different, Duke actually started out as a scroller game. I do personally think it offers a renewed value in scroller games and I hope that more come in the future. As far as buying it, if you are a die-hard Duke fan, then buy it. If you are not I say buy it anyways. Even though it has no Multiplayer ability, you will have fun blowing things up and coming back for more.

Graphics: * * * * The graphics are crisp and clean. You can read stores and street signs with no straining. The interface is also easy to follow and understand.

Game Play: * * * * Although there is no multiplayer to the game, you can still spend hours playing it in single. Each stage has something different to offer to keep the bore factor to a minimum.

Controls: * * * * With a standard gamepad control of Duke is pretty easy. Most side scrollers have an easy control base.

Sound FX: * * * Other than Duke most famous one-liners, the sound is alright. The only real advantage is when it speeds up and the end of each mission and you are fighting Morphix. The weapon sounds are decent but nothing to get excited about.

Cool Factor: * * * * Well what can I say. I love this generation of games, and I am glad that there may be a comeback. Although this generation may not like it, as I always say, "How do you know if you don't try?" So I say, get playing it and frag on.

Look for more reviews from me in the future.
MWGL News - Printer Friendly Version